For the last thirty years my work has involved managing advertising pitches – one of the most highly charged examples of Idea Economics in action.

As a ringmaster in the pitch circus for 25 years, I briefed the best agencies to compete with each other to come up with game-changing ideas for some of the world’s biggest brands.

We normally apply value judgements to ideas – big, brilliant, interesting, game-changing etc. But what counts is whether an idea is valuable or not, and if so, how valuable. This is the basis of Idea Economics. Not just making more ideas, but making ideas more valuable.

For advertising people ideas are both the raw material and the product. We understand their value. We have always been aware of the difference between a one in a hundred idea and an ordinary idea, even if we lacked the magic valuation formula. The one in a hundred idea by the way is what I call a VERY! IDEA. 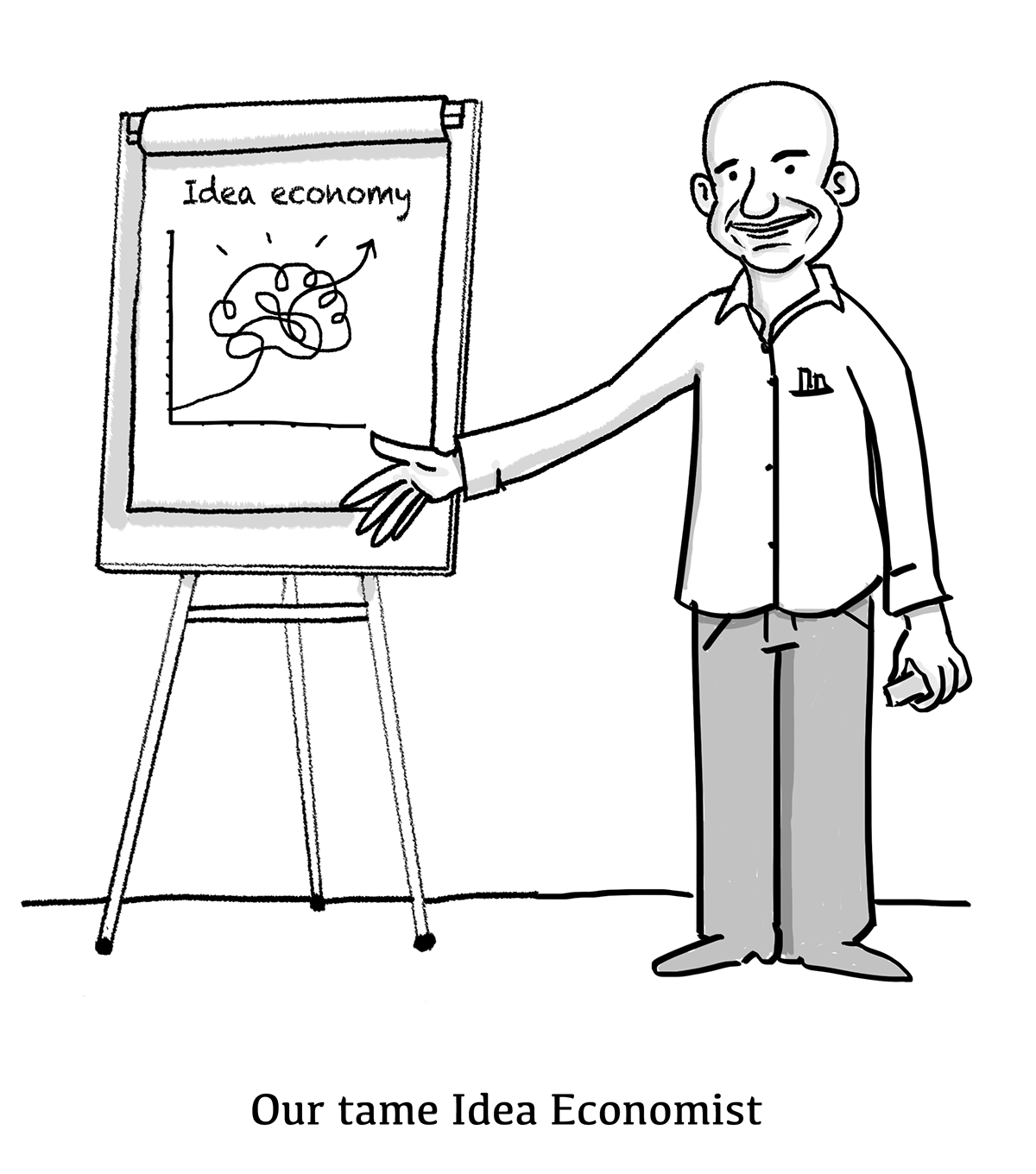 This is Jon Leach, our Idea Economist, whose maths knowledge enables him to achieve the impossible, and quantify creativity. Jon is a well-known ad agency planner, lecturer and guru – with long spells at BMP, HHCL and Chime. Jon’s skill lies in explaining the numbers of valuable ideas. Here are just three examples:

Why we remember distinctive ideas, and why lesser ideas swiftly lose impact

We are on the receiving end of literally thousands of commercial messages a day. But only a tiny fraction of those ideas stick. Many stimuli impinge on our short term memory but few ideas (or adverts, or images, or tunes) are good enough to get into the long term memory and become permanent.

A lot has to do with decay rates.

Let us say that the most powerful idea possible is one that we think about every day with 100% probability, for ever. The worst idea is one that doesn’t even register on day one. So we have a spectrum of ideas with a “memory chance” of 0 to 100%.

The first thing we notice is that mediocre ideas rapidly get forgotten. The statistical Mr Average who sits right on the 50% mark has only a 25% chance of still being amongst the apples of our eye on the second day (0.5 x 0.5 = 0.25) and a one in eight chance on the third day. A full week after Mr Average came into our lives there is only a 0.4% chance that we are still thinking about him, a tragic one in 250 chance.

But what is less immediately obvious is that those ideas that initially seem to be highly memorable also suffer the degradations of time and get forgotten. So a strapping young buck of an idea with 90% memorability does quite well on the second day (81%) but is becoming quite tiresome and dull by the end of the week (43%).

Given enough time, even pretty good ideas can start to fade in our minds. Mr 90% is down to 21% after two weeks, 10% by three and a washed out 4% by the end of the month.

So what we find is that only a few rare ideas are robust enough to cling on within our careless, fitful brains. A 99% idea is still doing pretty well after a month at 74 % while the ‘one in a thousand’ idea that is 99.9%, even after a month is virtually unchanged at 97%.

The Dividend from Being Prolific

If we are to believe the social scientists and assume that (in round numbers) we are on the receiving end of about 1000 ideas a day, does that mean that every day a real charmer starts worming its way into our mind and takes up permanent residence?

Probably not, due to another piece of maths known as the normal distribution or bell curve. This theory suggests that most biological populations arrange themselves with a lot of people around the middle and increasingly less numbers toward the edges. So if the average man is 5’10” tall then there are loads of men who are 5’8” or 6’, quite a lot (but not so many) who are 5’6” or 6’2” but not many at all at 5’0” or 6’8”. And when we get to 4’6” and 7’2” then these are rare flowers indeed

And this is the case too with ideas, which are, just a product of the biological phenomenon that is mental innovation. Many more ideas are in the 40% to 60% range than in the 80-100% range. And so encountering an idea that has 99.9% memorability power is not a one in a thousand (or daily) event but something much rarer than that.

Creative people are not so arrogant to think that all their ideas will be at that level, so they instinctively generate far more ideas than they will ever need. This may seem wasteful for those who don’t create ideas for a living. Why not just think of the good ideas first? Unfortunately, much like extracting gold from low grade ore, you need to churn through a lot of stuff to find the value.

Sifting through a lot of material is the core challenge for the creative industries. If ‘natural’ creativity is clustered around the 50% mark then it will decay rapidly to something like 0.4% within week, and not be memorable or useful. Even 90% creativity isn’t that much better. So the job of the creative organisation is to deliver creativity that is way up in the high nineties, for only then will it have real commercial power. In the kingdom of ideas, many are called but few are chosen.

Now that we can see how creativity works mathematically, what can we do about it?

As a starter, the obvious thing to do is not agonise for ages about searching for the perfect solution. Much better to generate a lot of creative ideas; dozens, hundreds even. The explanation for this (although this is not how they would put it) is just basic probability theory.

If you keep adding in ideas then they will tend to spread out into a ‘normal’ distribution much like human heights do, or as if you were dropping grains of sand on the same spot. We always need to remember that ‘prolific pays’

The Multiplier Effect of Sharing

On the other hand if I give you my ten best ideas, while you are now up ten ideas, I still have my original ideas and so we now are collectively better off. By me giving you my ideas and you being open to these ideas, we now have a collective ‘idea wealth’ of twenty ideas.

Creative collaboration is really about the exchange of ideas. So assuming we each bring to the party 10 unique ideas, once we swap them we then do seem to end up with 20 ideas each. Each of us is up on the deal.

But actually what we have – at least as a potential maximum – is 120 ideas: your 10, my 10 and the mutant possibilities of crossing each of your ideas with each of my ideas to generate 100 hybrids.

Now, just as in nature, many of these hybrids will be still born i.e. of no value. But the point is that by daring to expose my pristine intellectual DNA to your exotic but unpredictable cognitive gene pool then we improve our collective chances of creating a vigorous valuable idea.

The good news is that creative collaboration is a non-zero sum game.

An important principle of Idea Economics is that you need to not just hear the other person’s ideas but emotionally invest in them in order to unlock the maximum value. 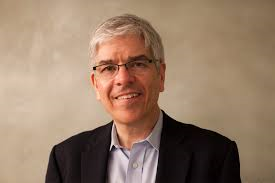 Early on, cynics told me Idea Economics was pie in the sky and would never catch on.

But something happened a couple of weeks ago to change all that. Paul Romer of NYU won the Nobel Prize for Economics. Part of his citation was for championing the importance of the ideas economy. Hopefully in time that will do for Idea Economics what Kahneman’s Nobel Prize in 2002 did for the behaviouralists.

Romer is a very senior and well-respected economist. Formerly Professor of Economics at the Universities of Chicago, Berkeley, Stanford, he was until recently Chief Economist at the World Bank.